Andrew and I recently signed up for Netflix and have quickly become addicted to White Collar, so on Saturday when the weekly question, “What do you want to do tonight?” was raised, it didn’t take us long to find an answer:  stay in, cook a nice dinner, and feed our new addiction.

The chicken was completely off the top of our (Andrew’s) head, and turned out really well! We sauteed a few cloves of garlic (minced) in a large saucepan with some olive oil, added two large chicken breasts and browned the sides, then added: red wine (we used a Merlot because that’s what we had,) balsamic vinegar, low-sodium chicken broth, a can of diced tomatoes, parsley, and spices (pepper, paprika, thyme, oregano, 2 bay leaves.)  We stirred well, brought it all to a boil, then reduced the heat, and let it simmer for a while until the chicken was cooked all the way through.  We served it over brown rice, which we simply put in the rice-cooker and followed directions. 🙂

The beet recipe came from Better Homes & Gardens a few months ago;  we’ve made it a few times and love it!  The recipe is pretty easy too:  peel the beets, and cut into (3/4-inch?) chunks.  Toss with a little bit of olive oil, salt, and pepper.  Put on a roasting pan, and put in the oven at 400 degrees.  Cook until tender, about 35 minutes, stirring halfway through.  Let the beets cool*, then toss with crumbled goat cheese** and sliced almonds.   We served ours over some mixed greens in order to squeeze in a few extra veggies, but the beet salad is great by itself too!

(*We did not let ours cool this time and the goat cheese melted [I know… we were shocked as well.]  Still delicious, but not as pretty.) 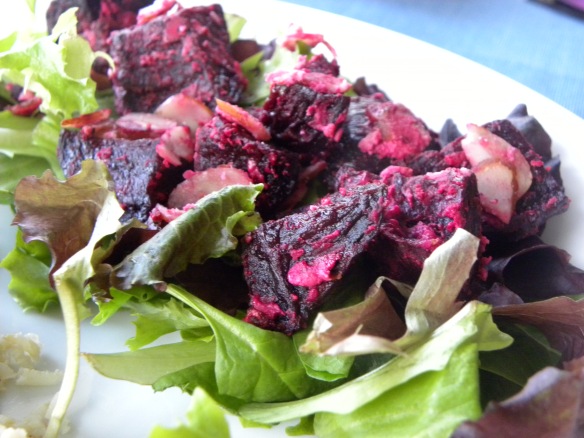 A close-up of those beets in all their melted-goat-cheese goodness… how can you not love such a colorful dish??

Note to anyone who is not typically a beet-eater, but might try this recipe: you may notice some, uh, color-changes on your next trip to the bathroom after eating beets.  Don’t be alarmed 😉