Andrew and I tag-teamed dinner last night.  He handled the protein, and I made a side dish from a recipe found in The Gluten-Free Bible cookbook:  Asparagus-Parmesan Risotto.  As usual, I altered it a bit.

I don’t have the exact recipe for what Andrew made, but I know he cooked the salmon in a skillet with lime slices and ginger, and made a soy sauce based sauce.  It tasted good, but the risotto was the clear winner according to my taste buds.

1. Melt 3 tbsp butter in large saucepan over medium heat.  Stir in rice; cook 2 minutes or until rice is coated with butter, stirring frequently.  Add wine; cook, stirring occasionally, until most of the wine is absorbed.

2.  Meanwhile, bring broth to a simmer in medium saucepan over medium-high heat; reduce to heat to low. 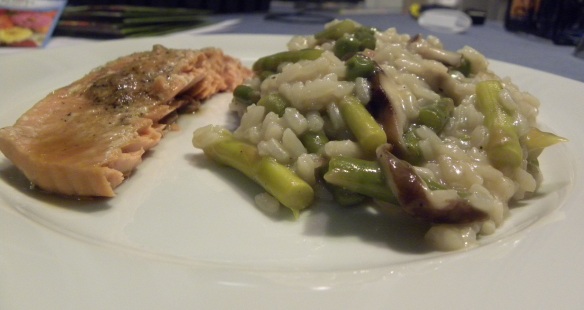 I did sprinkle some Parmesan cheese on mine, as the original recipe suggested–none for the lactose-intolerant guy, unfortunately.  At first glance, 4 tablespoons of butter seemed like a lot to me, but the recipe made so much risotto that there really isn’t that much butter per serving.

And, oh man, it was tasty.  Even without the Parmesan cheese it was creamy and filling.  Andrew and I both went back for seconds.