We are home from Denver and feeling a bit jet-lagged today!  While I only spent three and a half days out West, Colorado did not disappoint.  We packed as much as possible into our brief trip.

I arrived Wednesday evening after flying by myself for the first time (I know–how does a person make it nearly 27 years without flying alone?)  I made it through security without being pulled aside for the first time in three trips, I navigated the enormous Dallas airport, and it only took me one song on my iphone to realize the earphones were not plugged in all the way and everyone around me on the plane could hear my music.  Success!

Andrew and Jenny met me at the airport, and we drove downtown and had dinner at Ted’s Montana Grill.  After a day of peanut butter, bananas, and trail mix, I opted for a bison burger with fries and a side salad.  The burger was delicious, but huge, so I was only able to eat half of it (and Andrew helped with the fries ;-))  It definitely hit the spot!

Jenny had to work Thursday, so Andrew and I borrowed her car and took a trip to Golden–home of the Coors Brewery.

We walked around town for a bit, then ate lunch at Windy Saddle Cafe, which boasts some excellent gluten-free grub.  We split a GF butterscotch muffin as an appetizer (because who doesn’t need a lunch appetizer?), and each ordered a sandwich–Andrew’s on GF bread, mine on a fantastic baguette. 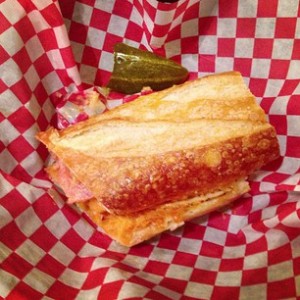 After lunch we took a tour of the Coors Brewery.  Neither of us are really beer drinkers–Andrew can’t have it because it contains gluten, and if I’m going to drink hundreds of calories of sugar, I’d rather have a Coca Cola– but the tour was actually very interesting.  Andrew said it was like being in an episode of Modern Marvels (that’s a good thing, in his mind.)  Of course, the few photos I took had little to do with how beer is made:

We picked Jenny up from work just before 4:00 and headed for the mountains; we’d booked a room at a hotel close to where we were skiing Friday so we wouldn’t have to wake up early to make the drive. 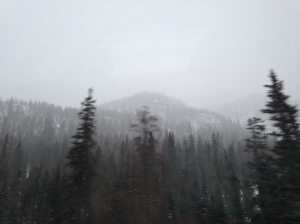 We arrived safely at the Alpine Inn, where Andrew morphed into an icicle maniac:

(Side note: As we walked past this window to check in, we noticed someone changing clothes inside.  I quickly turned away, feeling awkward, but also wondering why the heck someone on the first floor would get dressed with the curtains open!  When we walked back outside to get our things out of the car, we noticed someone else changing clothes in another room.  As Jenny and I were saying, “What is wrong with these people?!” Andrew pointed out that, perhaps that was the pool room.  And it was :-D)

Friday morning, we hit the slopes.  Because it had snowed the day before–and continued snowing throughout the day–we had the opportunity to ski on fresh powder, or “pow-pow” as we’ve heard it called. 😉  All three of us were more or less beginners (I skied twice in 7th grade,) so we took a group lesson.  Our instructor was amazing, and by the end of the day, we were not half bad. 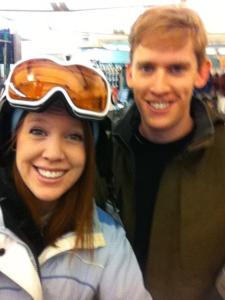 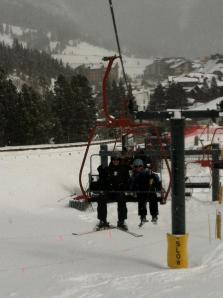 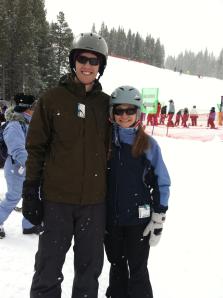 The obvious height difference on the ski lift cracks me up 🙂

Yes, I was wearing the same skis as 10-year-old boys. 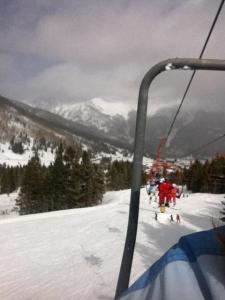 At the end of the day our instructor told Andrew to watch out, because the next time he took me skiing I was going to kick his butt 😀

Awesome sunset on the drive home

To keep this post from becoming longer than anyone cares to read, I’ll stop here for now, but there are more Colorado adventures to come in another post!

Oh, and the hot flashes?  I’ll save them for my next post as well. 😉