On Saturday, during the few hours of warmth before the cold and rain blew in, Andrew and I began work on our vegetable garden bed.  As I’ve mentioned before, last summer we grew our vegetables in pots, and while we experienced mild success, we have been dreaming much bigger for this season.  Rather than pots, we measured and marked a 10 ft x 20 ft plot in the back yard for the veggies.  Because that is a relatively large area, we rented a rototiller to help with the digging. 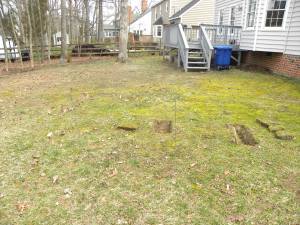 Don’t be fooled by the greenish hue you see;  it is not grass, but moss. 🙂  First, Andrew dug a few holes to find a cable line we knew was buried so we could be sure to avoid it.  Then we brought out the big guns:

Using a rototiller is NOT easy.  I had no idea.  Andrew did most of the hard work of breaking up the ground, which was predominantly clay.  A few hours, a lot of rocks, and one hidden tree stump later, we had this:

Please note the piles of rocks and roots.  We discovered lots of treasures, including large chunks of cement (seriously?  Why were those buried in the back yard?) and the aforementioned stump from a tree that the previous owners had obviously removed.  That alone was an hour of fun, axing, and shoveling 😉

Next, we amended the clay.  We added gypsum to break up the clay and organic compost to add more nutrients.  Let me remind everyone at this point that Andrew and I have only a vague idea of what we are doing.  It’s very much a learning process.

I used the rototiller to mix everything together, which was not as difficult as the initial breaking-up of the soil, but it was still a full body workout! 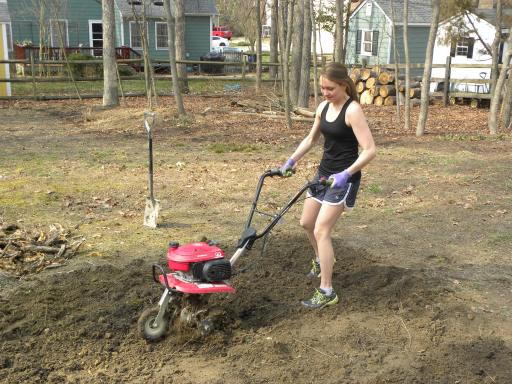 Andrew brought home some scrap stone from work (one benefit of being married to a mine engineer) that we used to create a mosaic path through the bed, forming two 4 ft x 20 ft beds. 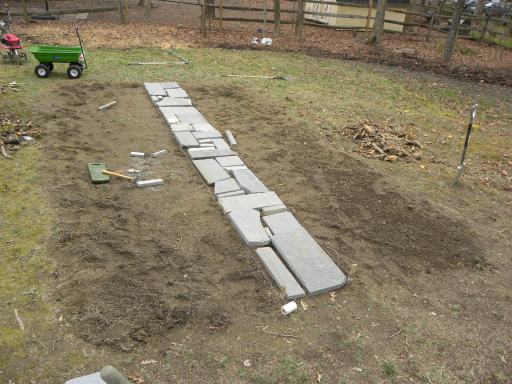 Now we wait for slightly warmer weather so we can actually put some plants in the ground and not just have a backyard mud pit (which is exactly what it is at the moment after all the rain we’ve had since Saturday. :))

It is a work in progress, but we are pleased with how it looks so far!