Two weeks ago I embarked on a 30-day dairy-free challenge due to some stomach issues I’d been having.  Today I thought I’d check in at the halfway point with some thoughts on the process so far.

How I Am Feeling Without Dairy (Warning:  This might be TMI.  My apologies.)

-Prior to giving up dairy, it was not uncommon for me to get a stomach ache at some point during any given day that required me to lie down for a little while.  As you might imagine, that is not a super convenient thing to have happen.  I am happy to report that there have been no such stomach aches in the last two weeks!

-Also prior to this trial period, my stomach was regularly so bloated that it was noticeable, not just to me, but to Andrew (only when prompted;  obviously he would never say, “Geez, Catherine, your stomach is so big!” :-D) This has not been the case at all since giving up dairy!

-This could partially be due to the nicer weather we are having, but I’ve noticed that I am not experiencing that “it’s 2 p.m. and I’d really like to take a nap on my desk” tiredness.  Similarly, I have felt more rested and am quicker to get out of bed in the mornings, despite being on the exact same sleep schedule.

Dairy Products I Have Really Wanted in the Last Two Weeks:

-Ice cream, ice cream, ice cream.  Last Saturday after dinner we stopped by Ray’s for dessert.  Ray’s is our go-to place because they have ice cream as well as frozen ice (dairy free) options, so we could both find something delicious.  As we looked at the menu that night, raspberry ice just wasn’t going to cut it when the people in front of us were getting hot fudge sundaes and double scoops of “midnight craving” ice cream.  I left empty-handed and a little bit sad.

-Prior to going to Ray’s that night, we celebrated our anniversary at Bonefish Grille.  I ordered the shrimp & scallops…and then realized I couldn’t have the lemon butter sauce with them.  Their other sauces are delicious, but that one just goes best with those scallops.

-Cheese on anything.  Or by itself.

-Iced Caramel Macchiato.  I passed the Starbucks in Target one day last week and saw a big banner with this on it: 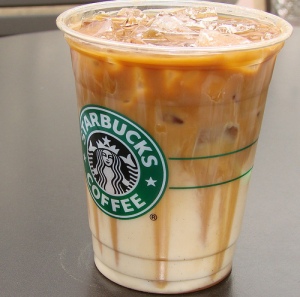 Mmm.  I know they can make them with soy milk, but there’s not a chance in the world it tastes as good, which leads me to…

Dairy-Free Products That Make This Bearable:

–Trader Joe’s Vanilla Soy Yogurt–It definitely has a bit of a soy taste, but the vanilla masks it some.  I take it with my lunch in a glass container with some frozen berries, and it’s pretty good!

The One Time I Cheated:

-As I mentioned, last weekend was our first anniversary, and we had  (gluten-free) frozen wedding cake to eat!  Funny story about the wedding cake: We did a smaller, nice gluten-free cake for Andrew’s sake, and bought regular sheet cakes for the majority of the guests.  While we did have many GF guests, we had a lot of cake leftover.  Like, the entire bottom layer of this guy: 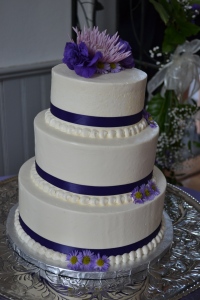 We sliced the leftovers and put the slices in zip-seal bags, two per bag, and froze them.  We have actually been eating eating our wedding cake throughout the year!  😀  At least we knew it would still taste good?  Anyway, I did eat some wedding cake, which had dairy, but we both took a Lactaid pill with it so I didn’t notice any adverse effects  (romantic, right? ;-)) 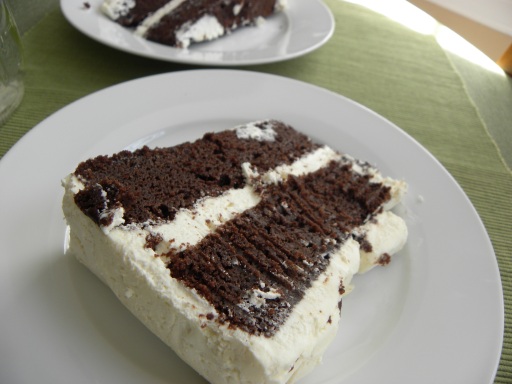 In conclusion, the evidence is not stacking up in favor of dairy, but I do feel a lot better, so I suppose it is bitter sweet.  I will give another report when the 30 days are over!  Thanks for bearing with me on a potentially TMI post. 😀