Yesterday… was glorious.  I took my first day off in three weeks, and I didn’t do anything I didn’t want to do.  I slept in (until 7:30,) blogged, ran, used a gift card for a massage, watched Netflix, and had dinner with Andrew when he came home from work.  The most stressful part of my day was my easy, 30-minute run.

I picked a familiar, relatively flat, out-and-back course through the neighborhoods near my house.  About a mile into the run, 100 meters ahead, I saw a woman running toward me with her dog.  Then, another dog–a Collie–ran out of a yard, barking at this woman and her dog.  I heard the woman yelling, “Go on!  Get out of here!” but the dog continued to bark and run alongside them.  Suddenly, the Collie turned towards me and began sprinting in my direction, still barking.  Oh geez.  I stopped immediately, bracing myself for whatever impact I was about the receive–paws, teeth, whatever.  The dog slowed as it came nearer, and at this point the woman and her dog were just across the street from me.  The Collie’s attention shifted back to them, and I continued running, glancing behind me a few times to make certain I wasn’t being chased.

On the way back, at roughly the same place the event had occurred, I noticed movement in my periphery.  I turned to the right and saw the Collie sprinting toward me once again.  Again, I stopped.  This time, he stopped too, and stared at me.  I lunged a bit toward him and said, “Go on!” He barked and ran backwards a few paces.  I continued running, hoping the dog would stay put or lose interest, but after a few seconds I heard, ptptptptptpt (<–the sound of four paws hitting the pavement at running speed.)  I turned around, took a few running steps toward the dog, and again he stopped and barked.  This continued for about half a mile, until he must have lost interest.

While I don’t think this Collie was particularly aggressive, being chased by a dog while running is very scary!  Unless it’s a dog that you know, you have no idea if it’s going to jump on you, bite you, or just keep you company.  Once, a few years ago, I was running on the sidewalk of a major road by my apartment.  It was raining, and I came up behind a woman walking her two (very large) dogs.  I was about to say, “Excuse me,” as they were occupying the entire sidewalk, when one of the dogs turned and saw me.  Because it was raining, none of them had heard me coming, and I must have surprised the dog, because he and his brother both started snarling and jumping at me.  The woman and I both stopped;  I took a few steps back, my heart racing at the near attack.  I think the woman was equally terrified (startled, anyway,) and yelled, “Next time, speak up!! We didn’t know you were there!!”  Dogs.

Aside from that, my day yesterday was wonderful and relaxing.  Plus, we had a super-food dinner:  Salmon, kale, and quinoa with tomatoes and herbs from our garden. 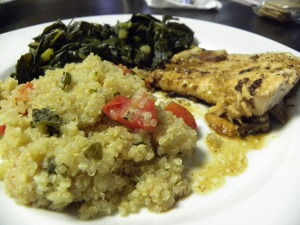 I hope you had a great Monday as well!

Have you ever been chased by a dog while running?  What do you do when that happens?

12 thoughts on “Running: When Dogs Chase”