Tonight… I play softball.  I have never before played, with the exception of a few intramural games in college and, of course, gym class, but I have always suspected that had I played growing up, I could have been pretty good.  Just a hunch.  (A few years ago when I told Andrew about that hunch, he said, “I don’t know if you have the size necessary to be really good at any sport.” Dream crusher.) 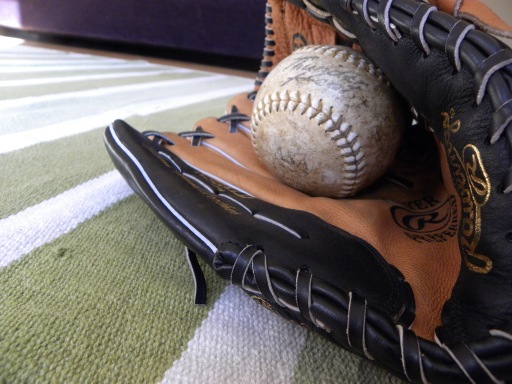 Yesterday my friend Evan from work asked if Andrew and I would be interested in playing on our church’s team.  In light of my unrealized dreams mentioned above, I gave him an immediate yes.  Our first game is tonight, so last night Andrew and I headed to a local high school field to play catch–or, as Andrew probably thought of it: give Catherine a crash course in fundamentals so she doesn’t embarrass me tomorrow. 😉 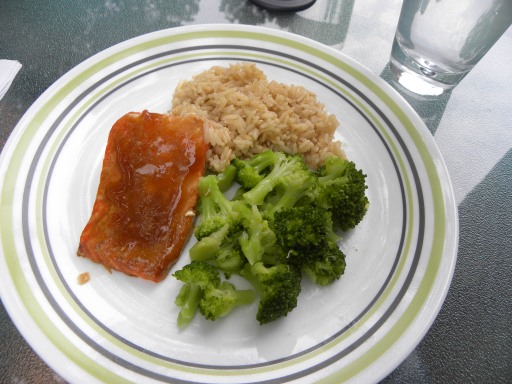 Baked salmon with a Dijon mustard/soy sauce glaze, steamed broccoli, and brown rice.  Quick, simple, delicious… and eaten outside on our new deck furniture, which made it taste even better!

During dinner we spotted a rabbit munching on weeds around the garden.  We see them out there daily, and so far they haven’t touched anything in the garden;  we are hoping the weeds will be enough to satisfy them!

Hey, bunny… get away from those tomatoes!

Ours are growing like crazy!  In the photo above, the tomato plants make up the jungle on the left.  Most have flowers on them, and the cherry tomatoes are starting to come out!

We also picked our second strawberry last night;  last week we put netting around the plants to keep the birds out, so hopefully we will be able to harvest more than one berry at a time now 🙂

As we split the single berry in half I thought, “Vegetable gardening really does make you appreciate the work it takes to produce food.”  You may be wondering at this point, “Is she going to post a picture of each individual fruit or vegetable they pick?”  The answer is: possibly, leaning towards likely. 😉

After dinner and bunny-watching and strawberry-picking, we grabbed our gloves and a softball and worked on some fundamentals.  As I suspected, I wasn’t terrible:  I caught the ball far more than I missed it, I threw it fairly accurately, and I was only hit in the shin once by a close-range grounder… And once in the knee, at which point I immediately fell to the ground in pain.  I now have a lovely bruise and pain to the touch. 🙂

“If that happens tomorrow during the game, you have to throw the ball before you can think about the pain.”  -Andrew

Any last minute advice from you softball or baseball players out there?