Andrew, like most Americans, loves bacon.  I like it by itself, but I generally don’t want it cooked into something I am eating because it makes the whole dish taste like bacon (“Um… exactly.” –Andrew)  However, after our disappointing experience at the Bacon Festival on Sunday, I wanted to give Andrew the bacon-filled feast he’d been hoping for.  Plus, I had my heart set on some bacon-wrapped scallops.  😀 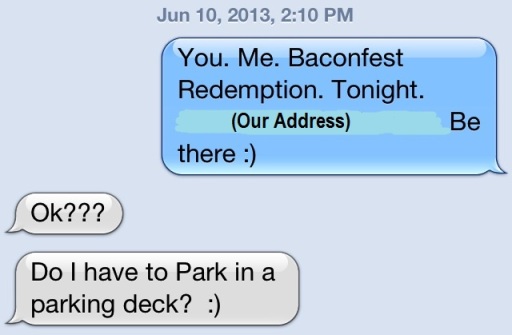 I had two goals: 1. Incorporate bacon into every dish.  2. Make those dishes as healthy as possible, considering they contain bacon. 😉

Here’s the menu (with links to the recipes we used) :

Bacon Quinoa with Almonds and Herbs

As usual, we didn’t follow the recipes exactly, making adjustments according to our dietary needs and what we had on hand (the only ingredients I purchased yesterday were bacon, scallops, Brussels sprouts, and asparagus.)  All we did for the scallops was wrap them in bacon and put them in the oven at 400 degrees for about 15 minutes. 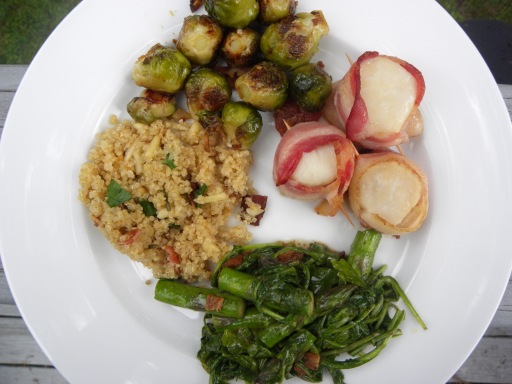 As you probably know, bacon is a very fatty food.  Some of these recipes called for vegetable oil in addition to using the bacon fat to cook.  In order to minimize the artery clogging, we left out most of the added oils and removed some of the bacon fat from the pan so that we were getting the bacon flavor but not deep frying the vegetables. We also didn’t use as much bacon as the recipes called for;  I think we put 2.5 slices in the in quinoa, 2.5 slices in the Brussels sprouts, 3 slices in the arugula salad, and wrapped each scallop with 1/2 slice.  We used a pound of traditional-cut bacon, but have leftovers of everything. 🙂

Despite what the photo above suggests, I did not consume any bacon by itself.  Andrew cannot honestly make the same claim. 🙂

Every dish was so, so delicious.  By the time I ate that last scallop though, my stomach felt a little crazy.  Andrew agreed.  It wasn’t that we ate too much in terms of volume and were stuffed; all the bacon grease was just so heavy. I had to stand out on the back deck for a few minutes because I felt nauseous from the smell lingering in our house.  Hah.

As much fun as it was to create our own Baconfest, and as delicious as those bacon-wrapped scallops were, last night confirmed what I wholeheartedly believe and regularly proclaim on this blog and otherwise:

You just feel better when you eat real food.

Bacon does not fall among these foods.  😉