Sunday morning, Andrew embarked on day two of kayaking.  Assuming he would be gone for a while, I decided to go for a solo bike ride after church and rode to a nearby park to enjoy the trails.  We’ve biked the trails at this park before, but for some reason I was struggling yesterday!  The ride to the park was fine, and the wider paths were no problem.  One particular stretch of trail was so narrow and uphill, though, that my Garmin kept switching to the “auto-pause” mode, meaning I was riding so slowly it thought I’d stopped.  Hah!

One of the wider trails in the park 🙂

Try to picture this:  I’m pedaling very slowly, uphill, navigating between trees and over roots, and up ahead there is a large stick on the path.  Let’s say it’s a small log.  It was about 3-4 inches in diameter–no big deal if I’d been going downhill or at a decent speed–but uphill at a snail’s pace?  That thing was going to bring my bike to a complete stop.  I decided the only thing to do was pop my front tire over the log.  As I did so successfully, I congratulated myself aloud with an enthusiastic, “YES!”…at which point I noticed a woman walking and looking right at me, not ten feet away, on the paved path that winds through the park.  She definitely heard me, and I can only imagine what she must have thought.

I ended up riding about 9 miles in just over an hour, which means I had a few pretty fast miles going to and from the park to balance those really slow miles in the park. 🙂 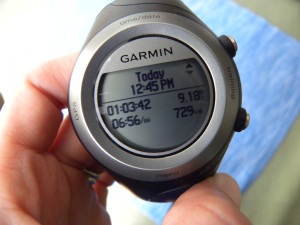 When Andrew returned from kayaking later that afternoon, he decided to mow the grass while he was still gross from the river. (If you aren’t familiar with the James, it is a very dirty river.  I stopped Andrew just in time a few times this weekend from sitting on the couch in his dry, but river-funky bathing suit.)  I had cleaned up from my bike ride and was upstairs getting ready.  About five minutes after Andrew started mowing the grass, I heard the lawnmower stop.  Then I heard the front door knob turn.  I knew it was locked, so I went downstairs to let Andrew in.  By the time I got there, he was walking in through the garage.   I asked if everything was okay, and Andrew, with as much calmness and little emotion as if he were telling me the weather forecast said:

“I think I ran over a beehive with the lawnmower.”

With that he bent down and lifted the bottom of his pant leg, and two yellow jackets flew out!  I would have been freaking out.  Andrew’s attitude was like, Eh, yeah, there are some bees in my pants.  Whatever.

Thankfully he was only stung once.  (He did clarify later that the bees were trapped around the ankle of his pants and not just flying around his legs.  I feel a little better about that.)  I walked outside with him to investigate, and we saw bees swarming around a few holes in the ground.  The grass in the part of the yard remains uncut for now.

Bee sting aside, we had a great weekend!

What did you do this weekend?
Have you ever run over a beehive with a lawnmower?