Thanks to Wendy over at The Scarred Runner for nominating me for this cool little blog award!  I am very flattered and excited to write this post. 🙂 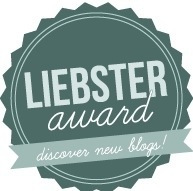 11 Random Facts About Me:

1.  I am very easily startled.  Not scared–just startled.  The majority of my coworkers have caused me to jump, gasp, and take a step backwards simply by walking through a doorway.  Recently, I was walking into the bathroom right before going to bed; the light was on in our bedroom and off in the bathroom, so there was just enough light to make out shapes.  For the briefest of seconds, a pile of towels on the floor looked like a wolf.  Obviously, I knew there was not a wolf in the bathroom, but my body reacted before my brain.  I gasped so loudly and turned to run.  Andrew looked scared at my reaction and asked what was wrong.  “I thought…there was a wolf in the bathroom.”  Yep.  Not going to live that one down…ever.

2.  I am very squeamish.  I once passed out while having my blood pressure taken because the cuff was so tight and I could just feel the blood pooling up in my shoulder and…
Similarly, a few months ago I cut my finger while slicing a bagel.  I didn’t need stitches, but it was a bad cut.  Andrew told me to hold it under the water and NOT look at it while he went in search of a band-aid.  I looked anyway.  Andrew had to carry me to the couch and later quoted me saying, “I’m bleeding out!”

3.  I really enjoy pranking people, and I always have.  Once in elementary school, I wrote down a fake message for my sister that her friend Sarah had called.  This was before 8-year-olds had cell phones, so she actually had to dial the number on our wall-mounted phone.  Instead of writing down her friend’s number, I wrote the number of one of my friends who was also named Sarah.  I correctly suspected that they’d have an entire conversation without realizing who they were actually talking to.  When Whitney finally figured it out, she chased me outside and around the house.

4.  I think I am hilarious.  One time in college I laughed so hard that I peed…I was laughing at a joke that I made.

5.  I have two nieces, and when each of them were born, I understood love in a whole new dimension.  But seriously, how cute are they? 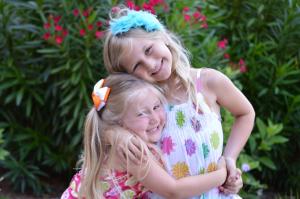 6.  I am at greatest risk of laughing uncontrollably at inappropriate times when my mom starts laughing.  A few years ago, my brother was participating in “No-Shave November,” or “Movember.”  When Thanksgiving rolled around, he looked a little scruffy, and we gave him a really hard time about having a Dirt ‘Stache.  At Thanksgiving dinner my very Southern, proper grandmother said, “Ross, I see you’re growing a mustache.”  I smirked, anticipating the criticism he was about to receive.  Instead of criticism, however, Grandma said, “I think it’s kind of… sexy,” raising her eyebrows on the last word.  My mom literally spit out a bite of mashed potatoes and laughed so hard she was crying.  I might have been able to control myself, but seeing my mom try to stifle her laughter while wiping tears off her face was too much.  We were quite a non-discreet mess.  It happened again recently, but the situation was so inappropriate that I fear we, along with my brother, are still in the proverbial doghouse with my sister, and therefore, I cannot tell the story.

7.  When I was little and couldn’t fall asleep at night, I’d sneak down to the living room where my dad was watching television (the rest of the family was asleep.)  I’d sit in his lap, and we’d eat popcorn and watch old Westerns, and he never told me to go to bed.  Those are some of my favorite childhood memories.

8.  My grandmother–not the sexy mustache one, but my dad’s mom–is probably cooler than your grandmother, and has more awesome one-liners than anyone I know.  Prior to suffering from Alzheimer’s, she was a feisty little Italian woman with a huge heart and strong opinions.  She was our babysitter growing up, and when I was in middle school, she drove me to the drug store one afternoon to buy supplies for a school project.  While standing in line at the checkout counter, she scanned the magazine rack and started angrily reading some of the taglines aloud:  “50 ways to please your man?? 100 ways to please your man??  If you did all those things, you wouldn’t have time to do anything else!!”  😀

9. I skipped school once during high school.  It was during our standardized testing week in the spring of my senior year, and I had a two-hour study hall that day.  My partner in crime, Whitney, had a two-hour physics class in which they were watching a movie.  (In other words, we weren’t missing much.)  We met in the parking lot after checking into and then excusing ourselves from class, and drove to Starbucks.  Immediately after ordering our Frappucinos, Whitney side stepped toward me, leaned in, and said, “Don’t turn around, but the librarian just walked in.”  Keeping our backs to her, we both went into the single stall bathroom, locked the door, and spent about five minutes freaking out.  What are the chances?? Why did we skip school?? We’re going to get in so much trouble!!  Finally, we peeked out the door, saw that she was gone, and claimed our drinks.  We were young and wild and free.

10. I am, as Andrew likes to say, an “emotional sponge.”  An easy crier.  I’m not sensitive in the sense that my feelings are easily hurt, but when I see/hear/read/imagine that other people are sad, it’s like I absorb the emotion.  Around Christmas this year Andrew and I were watching Home Alone.  <Spoiler alert> At the end of the movie when Kevin’s mom walks in the house and sees him standing in front of the Christmas tree, I started crying.  Andrew was incredulous.

“Why are you crying??”
“Because he’s okay!”
“…He’s been okay!  We’ve seen that he’s okay the whole time!  And you’ve seen this movie before!”
“But his mom didn’t KNOW that he was okay, and now she knows!”

Questions from The Scarred Runner:
1. What do you do to unwind for the day?  When I get home I grab a snack, lounge on the couch, and watch a few episodes of whatever sit-com is on at the moment.
2. What is your favorite dessert?  Ice cream.  No contest.
3. Cats or dogs?  Undecided.  If a cat is raised right, as ours were, they are awesome pets.  Ours totally broke the cat stereotype, but I don’t necessarily like other people’s cats.  Theoretically, I like dogs, but there are few things I find more gross than getting licked by a dog.  I am allergic to both.
4. What color is your car?  Grey
5. What inspired you to start blogging?  I enjoy writing, and I love reading other people’s blogs!
6. Beach or Countryside?  Beach.
7. Drive or Fly?  Drive.
8. Do you always have the latest tech gadgets before anyone else?  Definitely not.  I went from flip phone to iphone just a few months ago.
9. Least favorite celebrity?  Lady Gaga.  I don’ t know what it is about her, but her music makes me want to gag-a.
10. How do you feel about magic tricks?  I hate them.  Magicians are so smug, and I don’t like feeling tricked.  Seriously, don’t ever show me a magic trick.  I have very strong feelings about the matter.
11.  Have you ever modeled professionally?  Why yes, I had a brief stint with Rosetta Stone in college.  Look for me as you’re learning a new language.  (I just made up that question because I wanted to share that fact :-D)

My Nominees for the Liebster Award:

Thanks for reading, if you’ve hung in this long. 😀