I am home from North Carolina and excited to give a full account of the week, but first, I must acknowledge what happened yesterday:  Andrew hijacked the blog.  It was a legitimate hijacking.  Not only did he not tell me he was writing a post, but he didn’t tell me he’d done it afterwards either!  I happened to glance at the stats page on my phone, saw a few notifications, and thought, two people commented on…what post?  Oh…  What a funny guy. 😀  Because the stolen post seemed to be well-received, Andrew has landed himself a contract job as a monthly guest blogger (he’s not getting paid for it.)  I hope those of you that we don’t know in real life enjoyed “meeting” Andrew!

The team:
Our team consisted of twelve middle school youth and four adults.  I’ve probably mentioned this on the blog before, but I love middle schoolers.  I think they are absolutely hilarious in that you never know what they will say or do.  In that regard, they did not disappoint this week.  Actually, they did not disappoint in any way this week;  I was impressed by how hard they all worked and the great attitudes they had despite the heat and persistent mosquitoes. 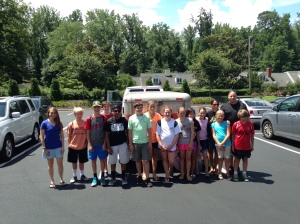 The people we served:
As I mentioned in my midweek report, we worked with a man named Chuck and his two teenage daughters, Ashley and Haley, who are in a very tough spot in life at the moment.  Chuck is sharp, witty, knowledgeable about many, many subjects, and full of hilarious one-liners.  “She’s as tough as woodpecker lips.”  “At least my report card didn’t stutter;  yours kept saying, “D-D-D-D-D…”  More importantly, he has a deep love for his daughters and a rock-solid faith that was evident to all of us.  Despite losing his wife, job, and being left to raise teenage girls, his devotion to God has not been shaken.

In addition to teaching us some legitimately useful life skills, Chuck showed us how “we rednecks” get strong out of in the country:  using heavy metal bars and sledgehammers: 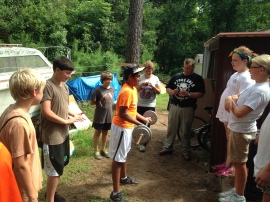 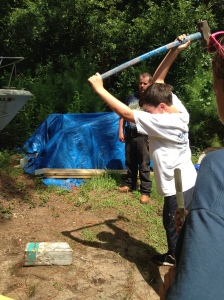 The work:
Half of our team painted the outside of Chuck’s trailer, and half the team replaced the floor in a few rooms inside.  As I mentioned above, everyone worked incredibly hard and finished the tasks we set out to do. 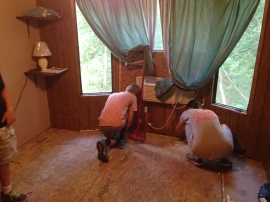 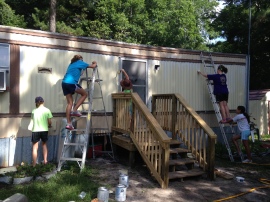 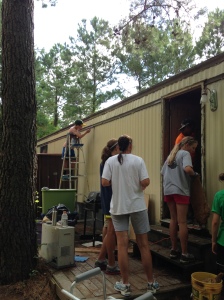 The funny (part 1):
The man living next door to Chuck owns a bunch of goats and keeps them in a barely charged electric fence.  Think static electricity.  Or a first grade science experiment using a battery and a light bulb (I know this to be true thanks to one of our awesome adults, Robin, who teaches science to elementary school students. :))  One afternoon Chuck showed a few of our youth what that fence feels like, and, because they are twelve years old, that entertained many of them for longer than you might think.  Weird, but harmless.  Well, the phone calls home that night sounded like this:

“Catherine let us electrocute ourselves on an electric fence today!  We kept shocking ourselves over and over!  What?  Why not?  Yeah, I’m okay… No, it didn’t hurt… No, we didn’t do it for very long…”

Oh boy.  Parents, I did not let your kids electrocute themselves.  Again, think static electricity, and please consider that your twelve-year-old may have exaggerated.  I do think, however, that a few of them seemed slightly more balanced afterwards… 😉

I will leave it here for now, but I have plenty more to report tomorrow.  Thanks for reading!